Your Guide to All 6 Cirrus Aircraft Planes

Cirrus Aircraft makes some of the finest light aircraft the world has to offer. Since their founding in 1984, under the name “Cirrus Design”, they have made major strides in the civil aviation industry. From designing patented parachute landing systems to ultra-lightweight jet aircraft, Cirrus has truly done it all in the world of aviation.

The company was founded by Alan and Dale Klapmeier in the mid-1980s in Duluth, Minnesota. While their corporate headquarters and main manufacturing plant are still housed there, they have a second facility located in Grand Forks, North Dakota. Between these two locations, they churn out hundreds of aircraft a year. In recent years, Cirrus Aircraft has emerged as a major industry innovator. Without Cirrus, the idea of an affordable private jet would be a pipe dream to many of us. But with the advent of recent models such as the Vision SF50, what was once a dream is now a reality.

No doubt, Cirrus is the real deal. But of their six aircraft, which is the best? And, more importantly, which is most responsible for pushing the industry forward? For these answers and more, check out our in-depth reviews of each of the six Cirrus Aircraft ever produced below. The Cirrus SR20 was first unveiled in 1994 in the form of a mock-up. Since then, it has won over the hearts and minds of countless aircraft enthusiasts the world over. And for good reason.

The SR20 incorporated several innovative features previously unseen among similar aircraft. For one, the SR20 was the first to feature the Cirrus Airplane Parachute System (CAPS). The CAPS debuted in the 1990s and was the first whole-plan ballistic parachute engineered to assist with emergency landing a light aircraft.

The introduction of the CAPS is one of the main reasons why we all know and love the SR20. Since its debut, the CAPS has been responsible for saving countless lives and providing immeasurable peace of mind to many private aircraft pilots. For this reason alone, we consider the SR20 to have secured a rightful place in the annals of aviation history.

But beyond that, the SR20’s specs speak a thousand words. Its original 1999 release version came fully loaded with the Garmin Cirrus Perspective avionics suite and a glass cockpit. Further, each SR20 came bundled with flex seating, 10” multi-function displays and side stick flight controls. At its price point, nothing from the SR20’s era compared.

The following variants have been released since the debut of the original version:

The Cirrus SR22 was the next model to come out of Duluth after the SR20. It is a single-engine four or five-seat plane that first hit the market in 2001. They are still sold today, and there are currently hundreds of SR22’s that’s in good operating condition that occupy our skies.

There are several important upgrades that the SR22 made in response to its predecessor. For one, it debuted a larger wingspan and fuel tank and an all-new 310-horsepower (230 kW) piston engine. Since its launch, the SR22 has gone on to become one of the world’s most commercially successful general aviation airplanes in the 21st century. As a composite aircraft, the SR22 is made of several metallic components and alloys. Like its forebear, it is also equipped with a CAPS parachute mechanism for added safety and peace of mind. Its latest iteration, released in 2017, includes overhauled avionics and a brand-new navigation lighting system for enhanced safety.

Since its original launch in 2001, the SR22 has released seven follow-up re-releases. These are: 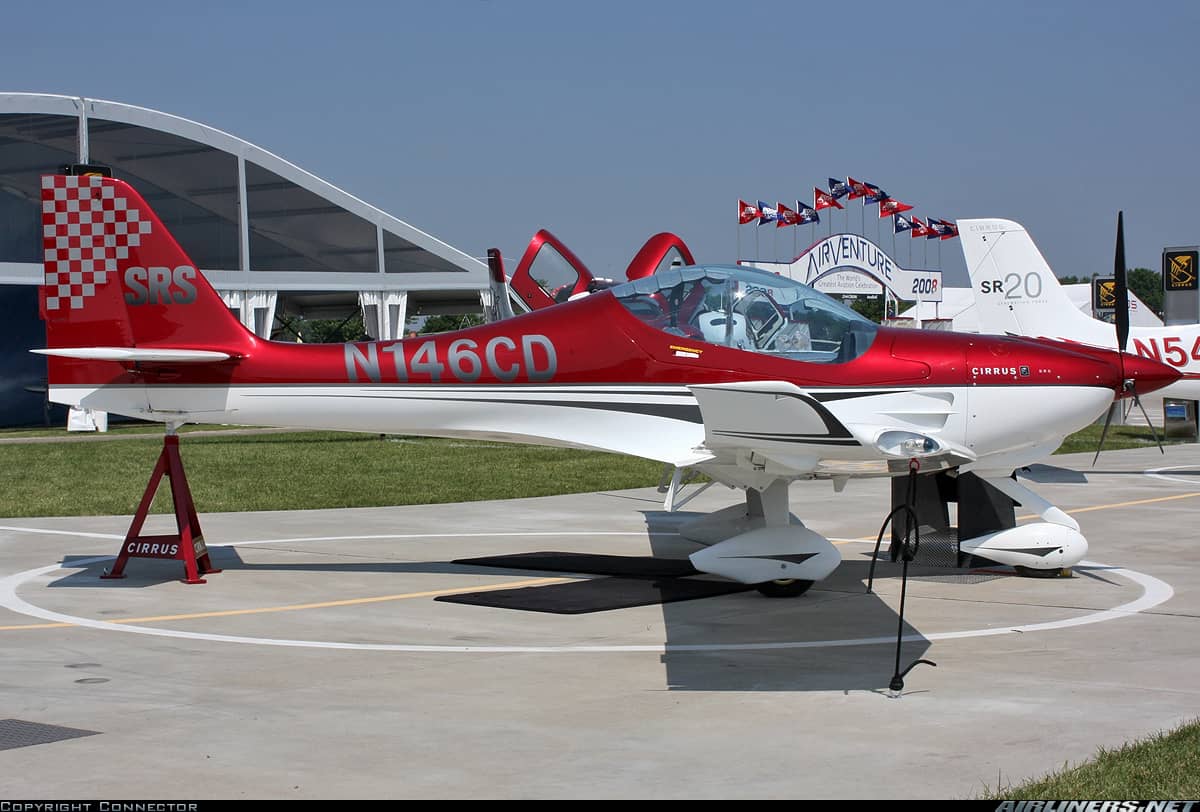 The Cirrus SR Sport, also known as the Cirrus SRS, was a modified version of the B&F Fk14 Polaris. The Polaris was a low-wing ultralight aircraft produced in Germany, and it is still in limited production to this day. However, the ill-fated Cirrus SRS was short-lived. The SRS was only produced and promoted from 2007 until the global financial crisis in 2009.

The first Cirrus SRS debuted at Airventure 2007. A light sport aircraft, the SRS was intended to be one of Cirrus’s flagship aircraft for the 2008 season. It was equipped with innovative glass fiber wings, electric Fowler flaps, and a mass-balanced fuselage. Additionally, it came with a ballistic parachute system (BRS 5), although this was an optional add-on.

Overall, the Cirrus SRS did not last long enough on the market for us to really sink our teeth into it. If you are one of the lucky few who managed to get a hold of one, we envy you. However, the only minor technical upgrades simply do not warrant the high price-point that its cancellation has created.

The Cirrus ST-50 was first flown in late 1994. It was structurally like the Cirrus VK-30, however with a redesigned engine. The aircraft was manufactured following a contract between Israeli aircraft maker IsrAviation and Cirrus Aircraft. Unlike the VK-30, the ST-50 was equipped with a PT6-135 turboprop engine made by Pratt & Whitney Canada.

The ST-50 saw moderate success and was flown regularly in the 1990s in Israel. The aircraft was featured at the Paris Air Show in 1997 and was given a center-stage exhibit. Unlike the other Cirrus aircraft at this time, the ST-50 had red color details and had a sleek and more modern aesthetic. 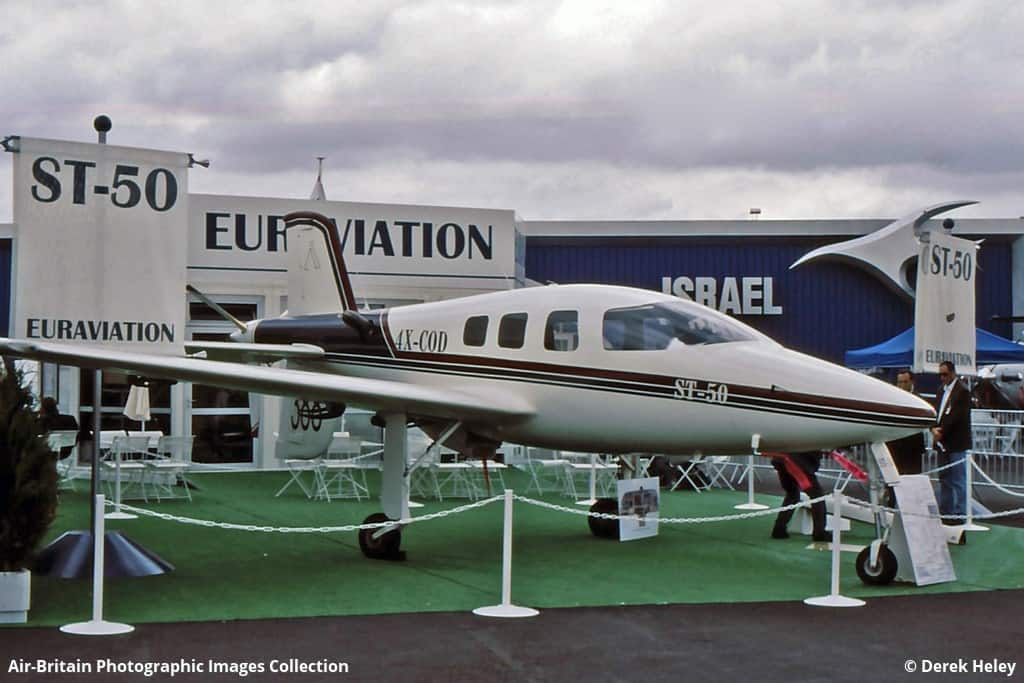 Our verdict of the ST-50 is that it is well worth the price. That is, if you happen to find one. Given its low production numbers, it is unlikely that you will find a model available on the secondary market. But this is a beautiful aircraft whose workhorse turboprop engine gives it the ability to blow the competition away. The Cirrus VK-30 was the company’s first-ever commercial aircraft. The VK-30, during its 5-year lifetime, was a single-engine pusher-propeller kit plane. It featured a quirky design that appeared dissimilar to most other aircraft on the market at the time. Today, few models of the VK-30 survive.

The VK-30 was the plane that started it all. Consequently, this means that it also had its share of kinks that needed to be worked out over the years. For example, throughout its tenure in production there were seven VK-30 aircraft that crashed. This resulted in ten tragic fatalities. These events were part of the reason why the aircraft was eventually cancelled in 1993.

Despite its flaws, the VK-30 is remembered fondly in general aviation communities. This is because it is innovative, original, and long-lasting. At the time of its release, no low-wing lightweight aircraft in the United States had the same quality build that the VK-30 had. This led to its modest commercial success, and several upgraded iterations in the years that followed.

For those single-seat aircraft lovers who want a reliable starter aircraft, we recommend picking up a revamped edition of the VK-30. Ideally, find a model that features an upgraded IO-550-G horizontal piston engine at 300 horsepower or above. An engine of this caliber will allow you to reach top speeds of approximately 250 mph.

Dubbed the “Cirrus Vision Jet”, the Cirrus Vision SF50 is the latest production model to come off of Cirrus’s assembly lines. The Vision Jet is a single-engine very light jet aircraft, and the first jet aircraft produced by Cirrus. Additionally, it is the first civilian jet to garner type certification with the Federal Aviation Administration.

The Vision Jet is an innovator in every sense of the word. For one, it is the only jet aircraft in the world to feature a ballistic parachute system, as it is fully equipped with the CARS proprietary equipment. Given its economical design, it is also the cheapest and smallest jet aircraft on the market today. The Vision Jet seats seven passengers. This means it is the ideal jet for small tours and private family getaways (or “jetaways”, as we call them). And, given its ease of use, it is the ideal jet aircraft for those who want the next step in their aviation skillset after piloting turboprops.

Overall, the SF50 Vision Jet is a beast of an aircraft. We highly recommend piloting a jet of this kind at least once, as it provides a unique aviation experience unlike any other. And at $2 million a pop, the Vision Jet comes at a truly incomparable price tag.

Imagine flying around the world and being paid for it.... END_OF_DOCUMENT_TOKEN_TO_BE_REPLACED

Silver Airways is a low-cost alternative for flights that travel... END_OF_DOCUMENT_TOKEN_TO_BE_REPLACED

Gaining a pilot’s license is the goal of many, and... END_OF_DOCUMENT_TOKEN_TO_BE_REPLACED

Meta: Renewing your passport can be daunting, but it can... END_OF_DOCUMENT_TOKEN_TO_BE_REPLACED

For anyone that wants their job to have something to... END_OF_DOCUMENT_TOKEN_TO_BE_REPLACED